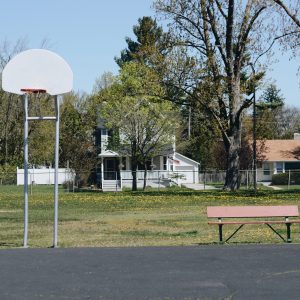 The echo of kid’s laughter and shouts of joy once filled the vacant property of the former Emerson school. Since the demolition of Emerson School in the early 2000’s, this site has been idle waiting to be transformed into a safe, recreational hub in the core of the City. Emerson is the only public park located in the center our city in a densely populated neighborhood surrounded by compact residential lots. These compact lots create increased demand for families to seek out Emerson park as their play space. Within a half mile of Emerson park there are countless family day care centers, and more than half dozen public and private schools. Many of the schools and child centers have little or no green space. In this urban core of Stevens Point, children have a greater need for public, outdoor, recreational space. Input was sought from the community and the overwhelming response indicated the site needed a new, vibrant playground that is inviting to our entire community. Vision for Emerson; wide open space for spontaneous play, modern playground for children of all ages, and multipurpose athletic court for basketball, tennis and pickleball. The Legacy of Play playground award will allow an underserved population greater access to a safe place to play. Emerson park is a community effort to revitalize green space for all. Input, planning and support of local citizens, philanthropist and community groups is closing the gap on the fundraising goal and vision to revitalize and transform the old school lot.