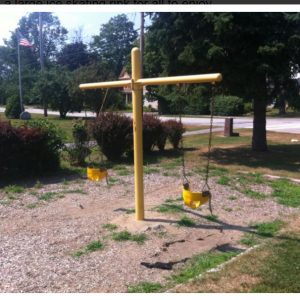 Legacy of Play Submission
Submitted on behalf of:

Club Secretary, Mark Slosberg, attests to be of legal submission age (18 years old or older) and has reviewed and agrees to the official rules of the 2021 Kiwanis International Legacy of Play contest.

The story starts with the inception of the Exeter Kiwanis Club and instant partnership with the Town of Exeter. Over the years, Exeter Kiwanis has participated and contributed in many of the town’s child- impacting infrastructure projects, including building of the Exeter Hospital Helicopter Pad, connecting the Exeter Area with the Kiwanis Pediatric Trauma Institute in Boston and Planet Playground, a community central public playground encouraging free play and imagination with a space theme.
In 2018, the Exeter Kiwanis while planning its annual Exeter UFO Festival, www.exeterufofestival.com, and reeling from the success of 2017, approached the Exeter Parks & Recreation Department about the town’s decaying public playgrounds. The town had recently adopted a strategic objective to make it pedestrian friendly between its downtown (location of the UFO festival) and multiple neighborhoods, including sidewalk and parks improvements. One such project was renovating its Park Street Common Playground in a neighborhood best described as socioeconomically diverse including single family, multi-family, modular and elderly housing all within walking distance. This neighborhood and its park have particular interest to the Exeter Kiwanis having a dense child population and some historical ties to a few club members.
After obtaining some town funding, Parks & Recreation issued an online survey to the town residents requesting input and received an amazing number of responses. A neighborhood site meeting was recently held to solicit aesthetic and functional elements which they would like to see in their local park. The community input and needs have far exceeded the town’s allocated budget.
Enter the Exeter Kiwanis Club to the Park Street Common Playground project. Having learned the importance of outdoor recreation for all ages during the 2020-2021 Covid-19 pandemic, the Exeter Kiwanis has agreed to use a portion of its community capital fund to support the project. Kiwanis plans to provide play elements for children 2-5 and 6-12 years in age, in addition to park infrastructure elements such as permanent picnic tables, benches, and games. The playground project is intended to have a two-generation lifespan providing important accessible play and respite for children young and old for over 50 years.

Partner Organizations
Town of Exeter, Department of Parks and Recreation
Town of Exeter, Department of Public Safety
Town of Exeter, Department of Public Works
Park Street Common Neighborhood Association and Membership
Planning for 2022 Installation
Final design plans including schematics and element bill of materials are currently being compiled. Parks & Recreation have the commitment to have all town committee approvals before December 2021 and place orders with other town departments and vendors (pending Covid-19 inventory delays) immediately following. Groundbreaking is planned after mud-season in Spring 2022 with a grand opening in Fall 2022.
Although play element and volunteer time donations are already planned from the Exeter Kiwanis, extended park elements are needed and will rely on additional fundraising efforts (hopefully including proceeds from the 2021 Legacy of Play Contest) from Kiwanis and other community organizations.
The Exeter Area Kiwanis thanks the Kiwanis International Legacy of Play Voting Committee for its consideration and welcomes any follow-up questions or requests for more detail.
Yours in Service,
Mark Slosberg, EAKC Secretary.